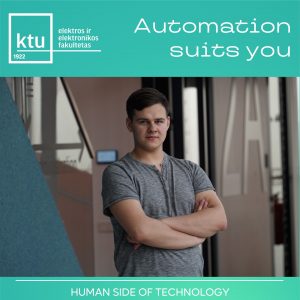 This time we have interviewed Paulius, a freshman student of Automation and control study programme, who at first was considering to study Transport electronics. However, after speaking with several graduates and remembering how he loved to construct since he was a child, Paulius chose his current studies of Automation and control. First-year student told us that he didn’t have any expectations when he applied to this programme and in a way just lured into this adventure: “I came here to see how things will turn out for me.” At the end of his first study year Paulius says he is coming to realise how his future job will look like and imagines himself as a traveling engineer: “a stable working environment has its pluses, but I’m tempted by the idea of constantly interacting with new people – I think it’s one of the best opportunities for self-development.” The module that impressed him the most in the study programme was the Introduction to Control Technologies module, where the first-year students were presented with the work of former students and shown how to work with the Arduino system, the possible outcomes of which, as Paulius noted, are limited only by one’s imagination. In this module freshman himself employed the Arduino system and constructed a dog-feeder. Paulius is also content about the modules of physics and mechanics: ”The Physics module provide a close-up view of how physical laws work and how they were discovered, while during the Engineering Mechanics laboratory works it’s taught how to identify bearings, bolts and studs and how to understand their mechanical properties,” student also adds that “the most impressive part of the Physics module was the measurement of the radioactivity of the material, and of the energy released by nuclear reactions.” When asked to describe the recent change in his studying routine, Paulius answered: “professors, in the contrary of schoolteachers, provide their students only with guidelines, with the help of which students then get to study on their own. It helps to learn time management, find information and work with the one already given – I believe that these skills are very useful.” Absorbed by his exam session our freshman still had the time to advice all the lost students-to-be to consult with the Students Association when deciding on a study programme and talk to former students, find out what’s the study culture like: “in this way you will know if it’s something you’d like or something that’s just not for you.”

The Campaign “Future for Electronics” has officially started