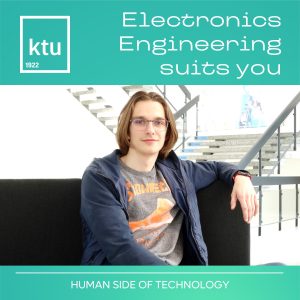 This time we interviewed another Karolis, who is a first-year student of Electronics engineering and who since the age of five has been talking about becoming a programmer. However, that prospect changed with time, and he became interested in electronics. Karolis admits that at a certain period of his life he was tempted to choose either far-away foreign universities or those closer of Vilnius, but he turned to Kaunas University of Technology because, as he says: “other universities did not seem as advanced, professors there didn’t put much thought into the advices they were giving to the students-to-be, on the other hand, the professors of KTU were ready to help and even to show around the university.”

Karolis chose this study programme because he was hoping to find likeminded people who lived of the idea of electronics. When we asked him what he didn’t think about while picking the programme of Electronics engineering, freshman doesn’t hesitate and points out mathematics: “The amount of this subject involved into the programme is quite scary, it requires a lot of time, additional studying, not to mention that the taught topics are way more complicated than in school.” Regardless, Karolis does not regret choosing this programme and is very happy with all the professors who are “always ready to help and communicate.”

When asked to tell the most memorable bit of his studies, freshman replies: “with the students association of the faculty we had an opportunity to build an electric shock device by ourselves and watch those who volunteered get lightly electrocuted.” First-year student also remembers his first months in the university: “introductory module during which for the first time we worked with soldering equipment left the biggest impression for me.” Karolis also made a nice observation about the changes in his academic life: “I always used to regard teacher as a superior person, whereas now I see the professors more like colleagues, who have the same goal as I do.”

The Campaign “Future for Electronics” has officially started